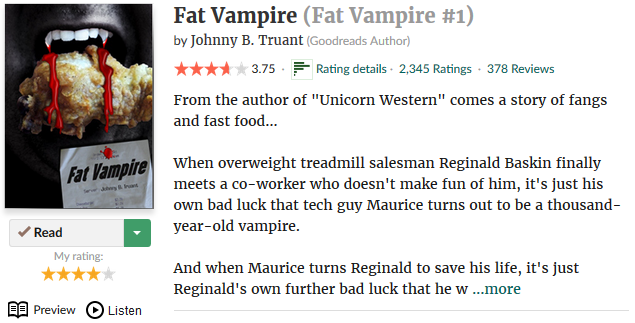 I picked up Fat Vampire at the beginning of Christmas vacation December 2017. I’m not usually drawn to vampire books and I’d never heard of Johnny B. Truant, but the description, reviews, and price tag (free at the time) swayed me. The first few pages won me over.

We know vampires as eternally youthful, with supernatural strength and speed. This book poses a plausible explanation for this and tells you the story of newly turned Reginald Baskin, an overweight man who would never have been turned under normal circumstances. I tore through the first book in one sitting and have just started Fat Vampire 6: Survival of the Fattest. Reginald goes from being an overweight human who can’t catch a break to an eternally overweight, weak, and slow vampire who still can’t catch a break but discovers he has mental powers like no other. The series is a fast an easy read, but it’s entertaining and well written. Will Reginald end up fulfilling his destiny? I look forward to finding out.